Around for Italy with a very special outfit - part 1/7 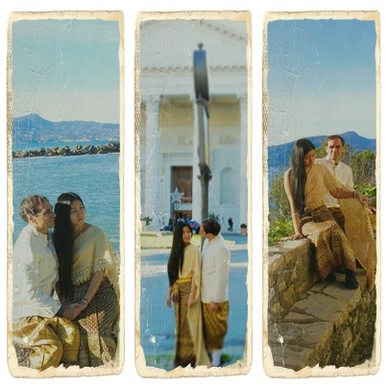 Was a hot afternoon of the Thai winter when Andrew asked to his fresh bride Mai if she could be happy to spend Christmas time in Italy.
“Could be a good occasion to have a little honeymoon and visit my parents that I don’t see in a few years now, I am sure they would be happy to meet you” – Andrew said.
Mai face was suddenly bright by for the happiest smile ever seen on her lips, a trip to Italy was her utmost dream since was a child, a far away fairy country known by commercials and pictures of stars sharing their holidays places on Instagram – please, take me to see the lining tower of Pisa – she said and a second after was hugging her husband and asking if it was true or just a dream.
A week later they were on a plane, destination Milan, to go from there to Chiavari, a small town in Genova province, where Andrew parents are actually living.

Secretly Mai had carried something in her bag that hardly could find a place in the closets od Andrew’s bedroom. Groom and Bride Thai traditional wedding dresses, looked so beautifully out of place with their colorful textures between black and grey whole coats.
“I want to have a shoot with our wedding clothes in front of Pisa lining tower” - Mai said.
Andrew was quite concerned, was the 23rd of December, a cold rain was falling and the temperature was a few degrees under 0, that clothes that had been even too hot for their wedding on the 23rd of November in Thailand, just a month before, in a totally different location would have been way too light.
Andrew was also shy to show himself in those clothes in a situation so out of context.
He was just starting to complain with his wife, when “Think the day we will show these pictures to our babies” – Mai said – “They will be really unique, everyone will be stunned”.
All of a sudden Andrew perspective totally changed, his mind was blown by the idea and his previous complaints changed in a simple “OK”.
“Why don’t we realize some pictures in Chiavari too and some other locations then?” – He said – “We have a month here in Italy, maybe we could have a few trips around and also go to visit my grandparents in Sicily”.
Mai was simply ecstatic, the same day a benevolent sun offered the occasion for some pictures around for Chiavari and so their little adventure started right away.
Chiavari is a small town, still so rich in history and natural panoramas. Perfectly located in the Riviera di Levante on the Mar Ligure, offers fascinating sightseeing. Its Cathedral from the year 1613 AC was another location just too beautiful to not be immortalized in their special album.
Challenging the cold winter and a bit of shyness, they realized some nice pictures with the help of Andrew's father as "official" photographer for the event. 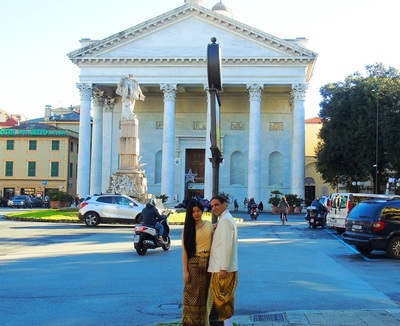 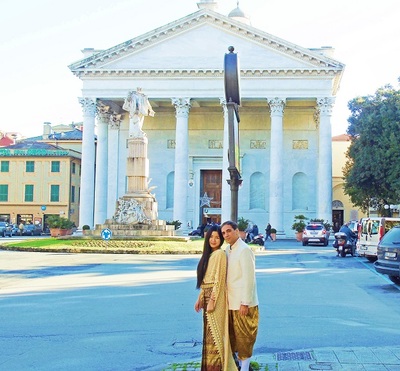 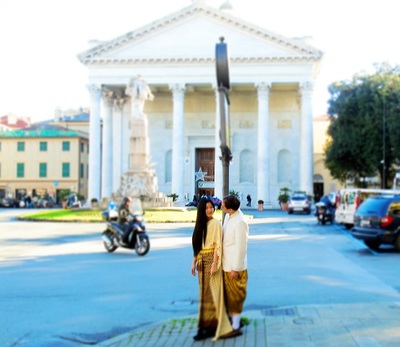 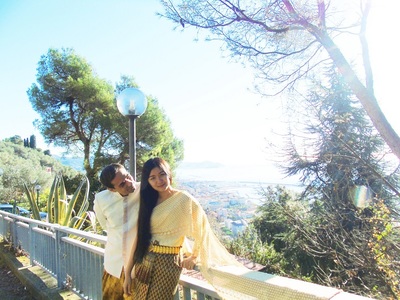 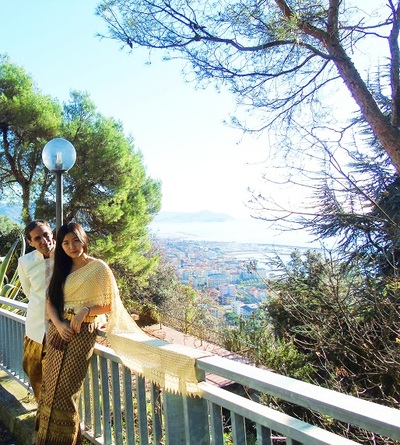 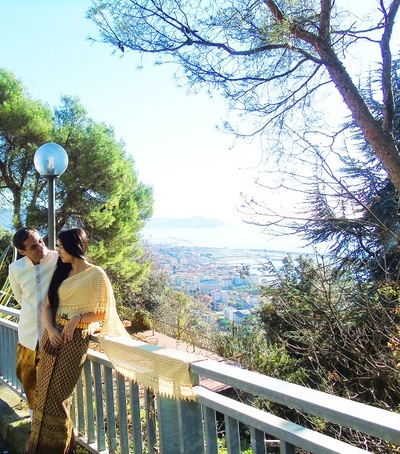 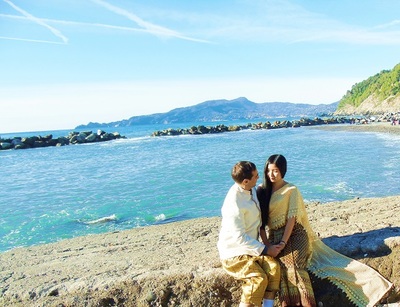 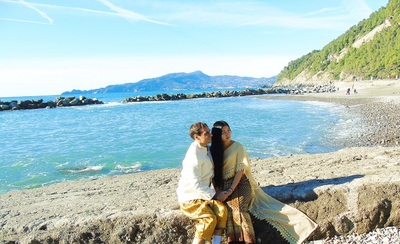 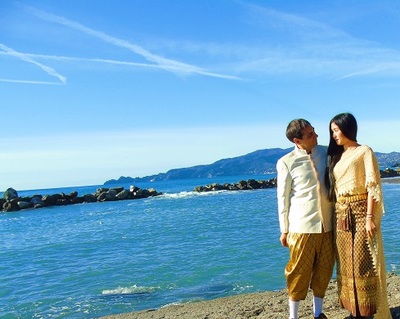 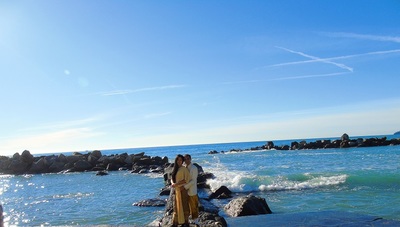 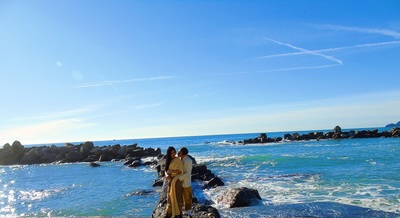 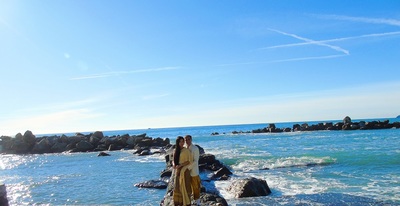 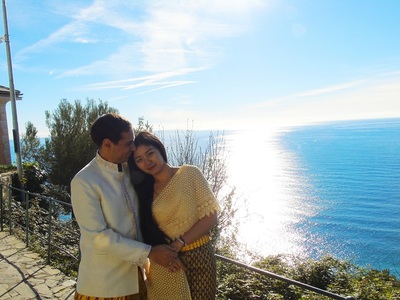 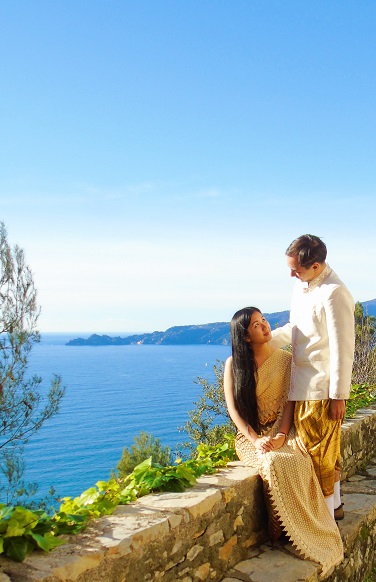 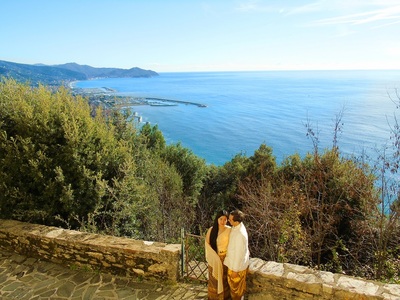 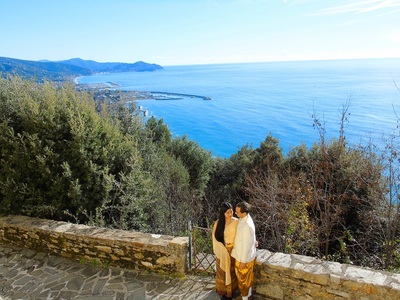 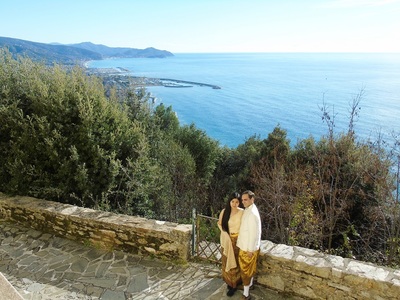 When they could look at their pictures, Andrew and Mai thought they were just too beautiful to not repeat the experiment in other locations.
The contrast between the traditional Thai wedding clothes and the Italian monuments created a suggestion that was particularly strong in their eyes.
They packed their bags, taking good care of their wedding clothes and planned a trip to Milan …………